OK I know what your thinking... Yuk....Black tank repairs sounds like something you don't really want to do yourself.  Anyway yuk factor aside here is how it went.

At some point on this last trip I noticed the black dump valve wouldn't close all the way, actually not just some point but in Bisbee, AZ!  I was 100% certain something was just lodged in the valve. I already had a tank flushing adapter but I went out and bought one of these as my current one didn't have a valve.

With this attached at least I wasn't leaking sewage all the time!  Unfortunate for any neighbors these things are all clear so some amount of brown liquid was often visible. If it wasn't windy I did cover it with a towel, but I can only imagine what people on the roads thought about that valve sticking out the side of the trailer.

At basically every campsite we had access to water and dump at our site I tried to flush out the tiny blockage by filling and flushing lots of water through the system.  Alas it never worked. But I can tell you I probably have the cleanest black water water tank of any RV. 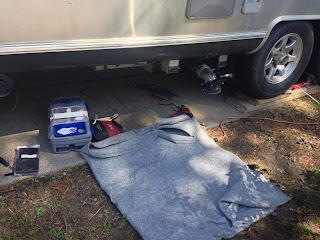 Working under the trailer is never fun! I did put as many boards under this side of the trailer to give me some room but it still wasn't much.

After removing the cover over the tank flush valve it was clear I needed more access to unscrew and replace the valve. So armed with my trusty Dremel cutting wheel I cut an access panel from the bottom of the tank pan. 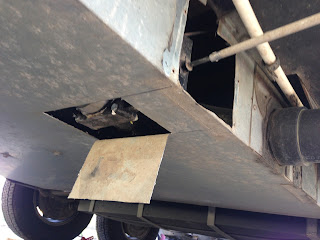 Dropping the entire pan was an option but I decided overkill. My hatch was near perfect. I had previously bought a replacement valve on the inter-webs as camping stores only carry models with short handles and the Airstream has a long extension attached to the valve.

Replacing the valve was only a matter of 4 bolts and sliding the new valve in place and replacing the bolts. OK it was actually harder than that. It did turn out there was what I think was some kind of cleaning wipe lodged in the valve or at least a tiny portion of one.  Looking back I think I could have snaked some kind of stuff brush up the system and probably dislodged it.  Other than the wipe the valve was in good shape, I could probably have skipped replacing it and just put it back but I already had the new one and it only cost 10$. 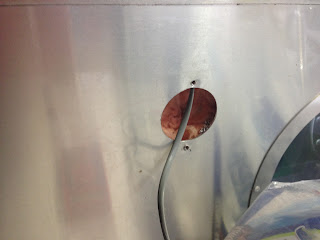 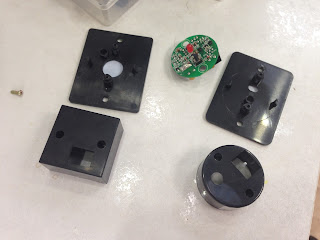