It has been a few weeks since we went to main we were busy with some other stuff but it was time to get back in the trailer and take a short weekend trip to VT. There were a bunch of state parks in VT we would have liked to stay in but unfortunately they don't allow dogs.  Instead we found a small campground called West River Camperama. 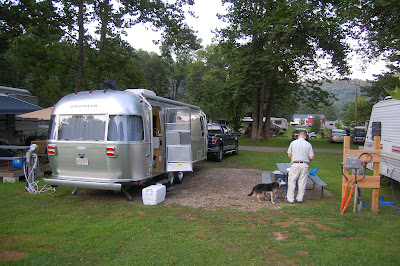 Although this campground was mostly seasonal/owners we got lucky and got a nice riverfront site due to a cancellation. This was our second mostly seasonal park and the residents were very friendly.

Almost immediately a lonely kid (dropped off to spend the weekend with his grandmother) started following me around asking questions about "The baked potato" which is what he thought our Airstream looked like. 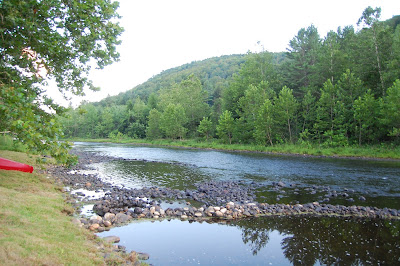 The sites were very nice and flat, this was the West River view we had from the site. Our fire ring was right by the water making for a nice relaxing place to hangout.
We got in early enough to get settled and have a relaxing dinner and some local VT beers.
I tried baking some cookies in the convection oven and it didn't go so well. The cooked too long ended up a bit on the burnt side, not to mention creating a bit of smelly smoke inside the trailer. Our Airstream only came with a combination Microwave / Convection oven which they say people love but I think I would rather have the real propane oven and a small microwave. Although at home I use a small convection oven all the time. My biggest worry is not really having as many options for cooking when we don't have a electric connection.
Airstream Log: This trip 126 miles and 0 nights . Lifetime 1148 miles and 6 nights
Posted by Brian Ciemian at 9:20:00 PM

Email ThisBlogThis!Share to TwitterShare to FacebookShare to Pinterest
Labels: Vermont