Well it has been a long summer and we basically barely used the trailer at all. Turns out getting things fixed took a lot longer than expected.  I am writing this far far after the fact so I've calmed down which is good because getting the fresh water tank repaired turned out to be THE WORST customer service experience I've ever had.

As an avid DIY'er I first entertained the idea of dropping the tank cover and checking out the leak for myself. Wisely I decided I had no good/safe way to raise my trailer high enough to work on and decided to bite the bullet and pay to have it fixed.

On the way home from the Winter trip it was impossible to get an appointment at the factory so I found the nearest Airstream place at home which was far away and tiny. They also couldn't even look at the trailer inside of 3 or 4 months as they only have 2 repair guys and a long line.  Sadly this left me with C*mping World.

Long long long story short they repaired the tank, I drove it home, on the first fill it leaked, I drove it back and they fixed it again and I drove home and my tank sensor was now broken.  This repair took over 3 months and 3 trips back and forth to the repair shop which is about 100 miles from home.  It included many highlights including being left in the waiting room not being told my trailer for several hours only accidentally being noticed by the manager as he was closing up shop for the night. Oh it's been done for hours!  All this and the tank sensor had to be mailed to me and I had to install it myself or take another 200 mile round trip.  This repair was one of the most frustrating things I've ever done. It involved a lot of yelling and arguing and most of incompetence. 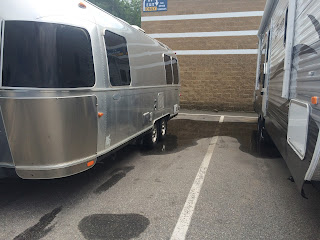 Did I also mention when I finally walked out to the trailer to hitch up and go home there was a big puddle under it?  Given all that I'd been through already I couldn't help but think this puddle came from my tank which was probably still broken.

A tech swore to me that the puddle was there before they parked the trailer. That being said I will say the tech that worked on my trailer today did seem very competent.

So much incompetence that in the end I didn't even pay a dime.  I had been so furious that I threatened to reverse the charge if they didn't refund me the money until the repair was completed the second time.  That threat turned out was pretty empty as my card company wasn't really willing to do anything. But it eventually worked so I hadn't paid for the repair. And when he found me on that final re-repair day as he walked out of the building to go home he didn't mention re-running my card so I didn't either....  Still I'd rather have paid the money and had it fixed in one trip any day.

Basically because of all this we barely used the trailer all summer. I had planned to do a few more short trips but it spent so much time in the shop the uncertainty made it impossible.
Posted by Brian Ciemian at 9:28:00 AM