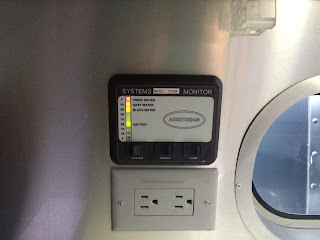 During our travels we spend a lot of time at RV parks where we don't have a water hookup. Many state and federal parks just don't have the fancy hookups of expensive private parks. Not to mention our stops at Walmarts and other free camping opportunities such as federal lands.

So knowing how much water we have left is usually pretty important. 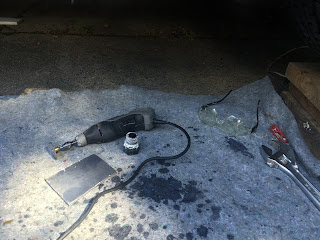 Once again I pulled out the Dremel and a cutting wheel and went ahead and put another hole in my trailer.

This part of the trailer is thick plastic which cuts like butter, however behind the plastic are 2 very expensive to replace water tanks.

Luckily during the final tank repair I crawled under the trailer with the tech and we mapped out the exact location to cut to avoid the tanks and gain access to the sensor. 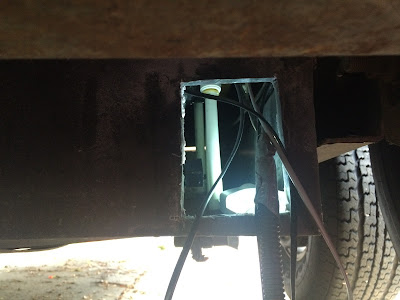 Here is a good look at the hole I had to cut. Although it looks like light is coming in from the bottom that is just a flat LED light I used to see what I was doing. It is sitting inside the tank cover.

The existing sensor was clearly broken, I imagine the first tank repair broke off the outside of the sensor. 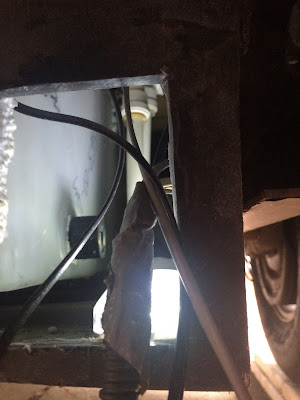 The new sensor was pretty easy to install, I used some teflon tape and just screwed it in. I then plugged in the phone jack style connector and replaced the rubber water shield over the wire and plug.

I didn't get any pictures of that. 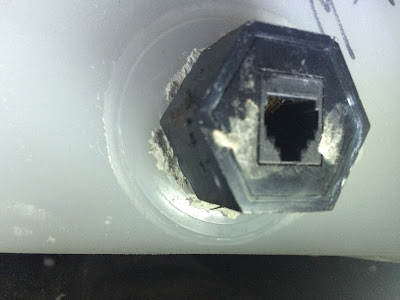 I don't think the newer Airstreams use a sensor that requires a hole in the tank. Sounds like a good idea to me.

After getting the tank sensor installed I had to run through the calibration process which is a lot more involved than it should be.

I am happy to say the new sensor seems to be working fine.
Posted by Brian Ciemian at 9:56:00 AM