Long long drive back to the USA! 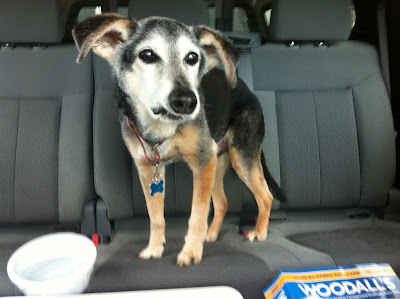 After waking up pretty early and walking Maxwell we made some breakfast (Coffee and Oatmeal with fresh cherries) realized we weren't going to be able to pay anyone for the nights camping so we hit the road!

Actually first we filled out water tank which had pretty much emptied because we drove for an hour with our water pump on and the kitchen faucet had wiggled on emptying most of the water. 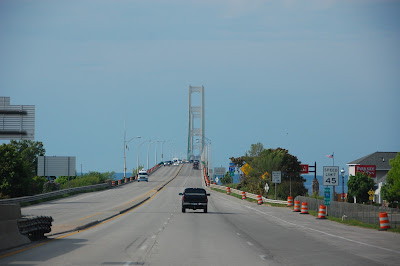 As you can see above Maxwell gets the whole backseat to himself and mostly just sleeps. He used to love car rides but now he just tolerates them.

Although he loves to stop and get out someplace new for a walk. We did that once on this long drive back from Canada to Michigan. It was a short hike to a lookout and then we were back on the road to the Upper Peninsular of Michigan.

Finally we reached the Mackinac Bridge (Link to Wikipedia info on the bridge) it is really really long! Crossing it there were high winds and we were alerted to keep our speed with the trailer to 20 mph.  Then is was a short drive to our campground for the night. I had picked it out a few weeks ago as we were going to be staying a few nights and I wanted a nice place.  The view is great and the price is only $25 per night. 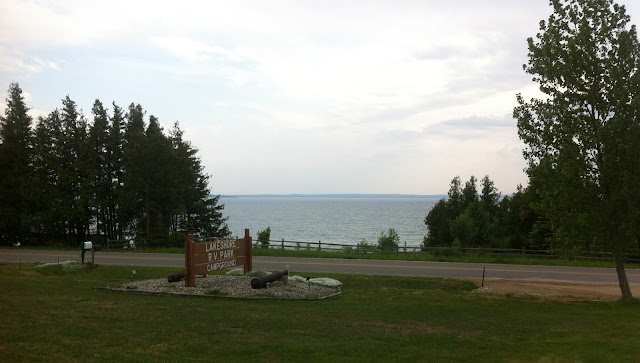 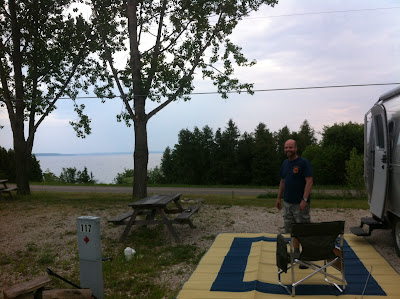 It was getting windy and about to rain when we got in so we didn't fully setup outside. That is our new camp mat and new director's chair.

We were pretty tired so we just relaxed, made dinner and watched some TV.

I tried our trailed "Roast" feature of the convection microwave which uses both heat and 30% microwave power to cook stuff quickly. 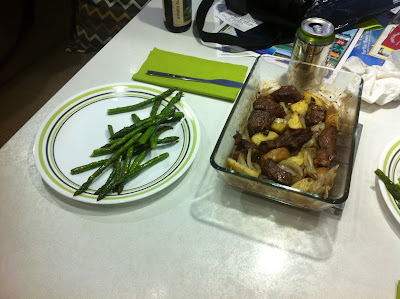 I made Lamb, potatoes and onions and some asparagus. This microwave thing is funky but it worked, dinner was fast, but the potatoes were kind of underdone.

It wasn't a large meal so we needed a little snack. We had more fresh cherries so we threw together a cherry crumble using Oatmeal, cherries, sugar and some blueberry sauce. We used the roast feature and it was done in 5 or 6 minutes. It was great but could have used some ice cream. 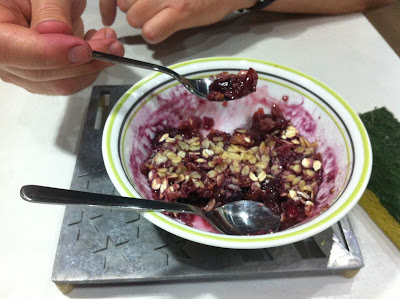 As the title says this was a long long day. We covered 432 miles! That is much longer than we really ever expect to drive in one shot but it actually wasn't that bad. We each drove about 1/2 of it. We used 37.2 gallons of gas for MPG of 11.6.

We are here for 3 nights so now we get to do some fun stuff instead of all driving!
Posted by Brian Ciemian at 10:41:00 PM