A few days in Asheville, NC 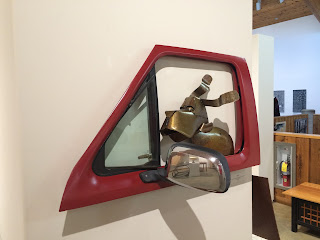 After a few Walmarts overnights in a row it was time to pull into a real campground. We ended up swinging into Asheville, NC to spend a fews days there.

We routed through Johnson City TN where we knew there was a Buffalo Wild Wings and timing was perfect to eat lunch and watch the Patriots game. 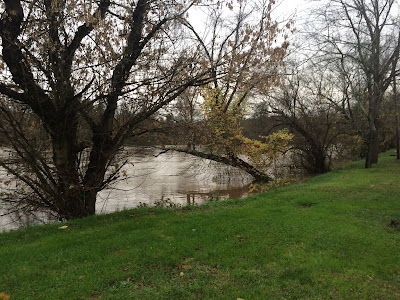 We started off in Asheville with a really rainy day, turns out they have had a lot of rain lately and once again the French Broad River rose 4-6 feet in a day right before our eyes.

But this time it didn't quiet get to the almost flood stage from a previous trip.

The rainy day was good, we got Will a new cell phone, hit a few used book stores and did some mall walking before checking out the Folk Art Center on the Blue Ridge Parkway. That is where the dog head car door piece was from. 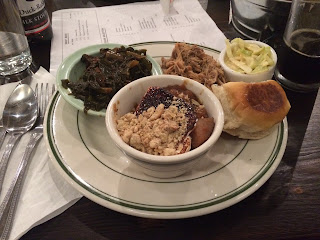 They have redone a few buildings in what they call the South Slope and it is all breweries and restaurants.

We tried out a BBQ place called Buxton Hall which was delicous and in a big barrel vaulted old building.

Food picks of our dinners! 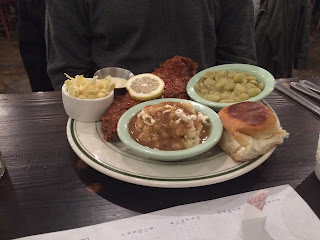 The whole hog BBQ and fried fish were both great as were the sides!

We also split a piect of Buttermilk Pie!

After dinner we had a beer at the brewery next door which had a live band playing. 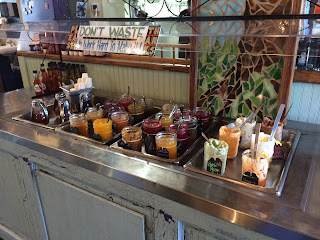 The next day we took an early walk with Tucker back to the dog park 1.5 miles away from the Campground. The entire walk is through Carrier Park and is really nice.

Tucker remembered the park but was a little bummed only a couple of dogs showed up to play with him. But he thanks Maddy and Walker who were a lot of fun.

After that we went to Bisquit Head in West Asheville. This is the Jam and Butter Bar you can use to enhance your bisquits. 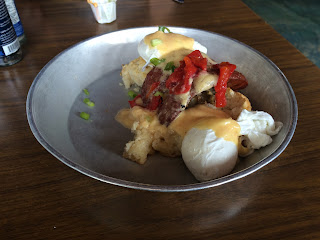 I had a Cajun Benedict Bisquit which really needed no additional jams or butter. Oh a big glass of chocolate milk!

Pretty good stuff, we don't get out to breakfast/brunch often but we missed this place last time we were here and it was worth checking out.

We walked around checking a few more bookstores and eventually spend the rest of the gloriously sunny day just relaxing around the trailer.
Posted by Brian Ciemian at 12:53:00 PM