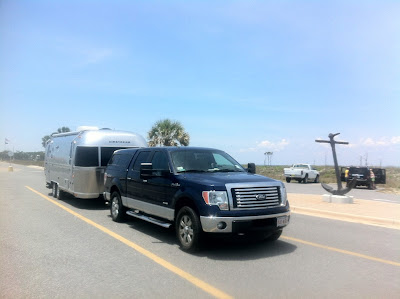 Thanks to a tip from the other Airstream person in GA we managed to get a reservation online for 1 night at St George's Island State park. All the FL State parks are basically empty becuse it is their off season....UNLESS they are an island... then they are booked.

Lucky for us we manage to get a different site with 2 nights when we arrive instead of our reservation.

The State Park is at one end of the island and is really nice. 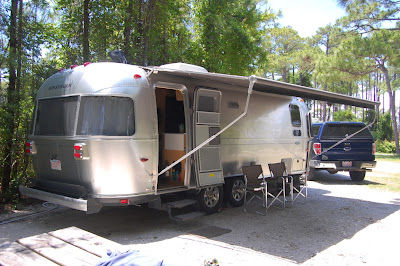 We end up with one of the better sites in the park with only one neighbor instead of two. St George's Island is big island but there isn't much there except condo's and houses and a maybe 5 businesses.  We hit two of them also on recommendation. First we had a great dinner of Oysters, Cievieche and Fish Taco's on the water at the Blue Parrot. After which we hit Eddy Teache's Raw bar for some more local color and a couple of beers. After those two there is a BBQ place a gas station and a tiny store. 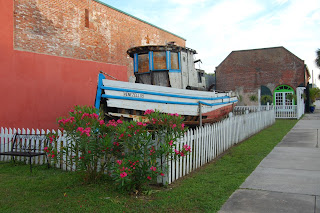 We spend the next day riding our bikes on the island it was about a 16 mile round trip ride. Basically to "town" and back.

We also drove into Apalachicola a bigger nearby town.  It was much bigger than St George's Island but still pretty quiet as the summer is Florida's off season. 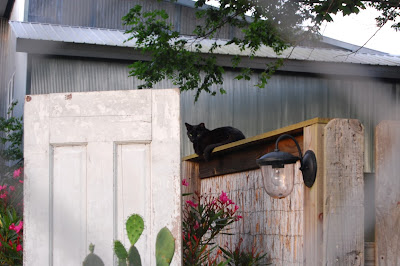 The town clearly needs a good vet and animal shelter as there are stray cats roaming everywhere!

They are kind of cute.

The is a waterfront tourist area with a few bars and places to eat but we just walk around town and check it out without any fanfare.  Golf Carts are the primary means of transport around town which is kind of odd and we see several probably drunk yahoo's cruising around town. 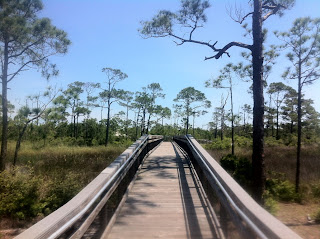 I nice nature trail lead a couple miles from our campgound (there was a more direct way too) to the beach so we hiked it with our beach backpack chairs one day. The beach was really nice with white sands and lots of crabs popping in and out of their crab-holes. The water is pleasently warm and we relax for a few hours of sun.

Finally some warm sunny weather.. this was the whole point of heading south for the spring.