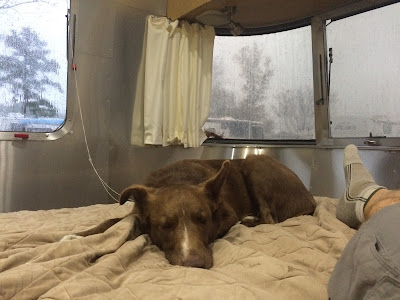 From Huntsville we travelled to Montgomery Alabama. There was a big storm heading across the south so we wanted to be in a city at a campground with services.

The storm did come and it rained pretty much for 18 hours straight.

Tucker did not like hanging inside the trailer so much.  Will got some work done and I did our first laundry of the trip. 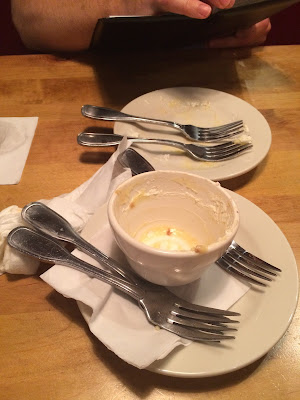 After the a while you just need to get out of the trailer so we decided to go out to lunch. We went out for BBQ at a chain from the south call Jim'N Nicks. It was a deluge of rain so we wanted to go to a place with parking and indoor seating. Most of the more authentic local BBQ places were just take out and that wouldn't get us out of the trailer long enough.

The BBQ was pretty good and I had a some leftovers too. I asked the waitress which was better the Bananna Pudding or the Lemon Pie and she said the pudding was better so we decided to split that.

To our surprise the waitress brought us both the pudding and the pie and said she thought we should try both... I never turn down a free piece of pie!

The pudding was better and something we don't get up north.
Posted by Brian Ciemian at 8:22:00 PM