A few days in Austin, TX 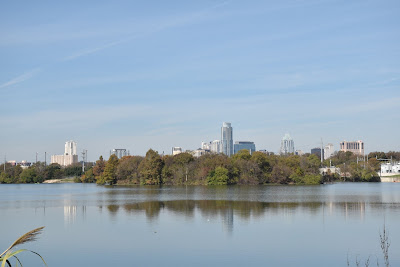 Austin is a very popular city these days, perhaps too popular. I am told hundreds of people move here every DAY!  In a lucky break I find a coupon for a RV park that is close to downtown for $19 / night weekday rate which is crazy considering it is a nice park with a pool and all the amenities.

Amazing too we want to stay 5 or 6 days and they tell us we can only stay 3... but we checked back in the morning and go the extra days even the weekend all for the 19$ rate! Major score. 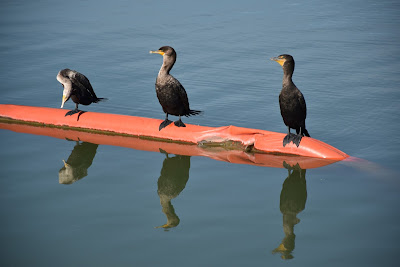 The visit started off with Will doing some work the first day and I met up with my friend Dan who recently was one of the hundreds of people to move here.  We caught up and walked around the funky hood and the river. We also made plans to have lunch the next day.

Austin is a funky little city and you can tell a lot of people are new here. Specially since none of them know where they are going which is bad because traffic sucks. There was not a single time we drove somewhere that we did not pass an accident. 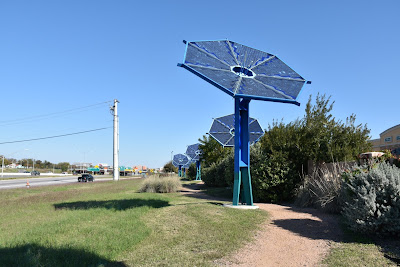 Still if you didn't have to commute it seems like a nice place to live. Very lively and not at all like other places in Texas we've seen.

We also will be meeting up with my brother and his wife to see their new Airstream and truck which they just picked up.

Once Will's work was done we had to finish it with a trip to Staples for some printing and shipping. 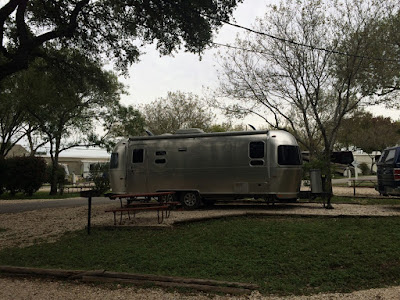 Here is our trailer in the nice park! One plan we had was to visit Franklin BBQ a famous BBQ place that recently had a short TV series on PBS. The line to eat there is legendary and on weekends you have to get there by 10 or there won't be any food left by the time you get in the door. We went on a weekday in the off-season at around 10:15 and were told we'd eat at 12:30 and there would be plenty of brisket left.

Dan and his girlfriend Diane met us there for lunch and we further caught up. 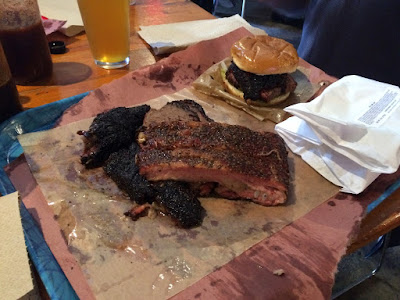 We also ate at HomeSlice a great Pizza place. We were told to get some breakfast tacos but that never worked out.

My brother ended up camping at a state park not to far from us so we went out there for a hike and lunch.

His new trailer is pretty nice! Similiar to ours but with some nice upgrades here or there. 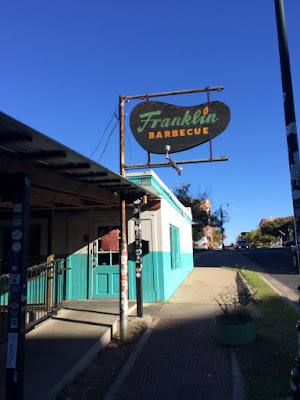 We also went out to dinner with my brother which for me didn't turn out too good as I came down with something aweful 1/2 way through the meal.

Not sure if it was food poisioning or what but it passed by the next morning.

Tucker got a long walk around the river and a few trips to the local dog park all of which he loved.

Everyone tells us how much Austin has grown, and it seems like probably too much too fast. Still it is growing more we know 3 sets of people who have moved here in the past year.

We took a tour of the State Capital which was pretty cool after walking around the downtown a bit. 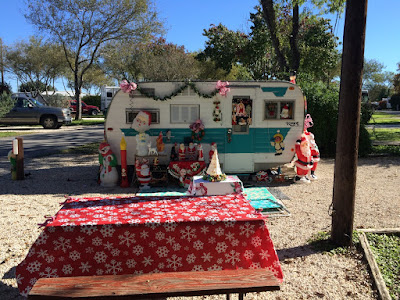 Our neighbors are very enthusiatic about Christmas. They had a truck full of decorations setup around their RV. I guess they were in town to shop for some more at a local Christmas Market.

We like Austin except for the traffic but I would come back again to eat some more delicious food and hangout.
Posted by Brian Ciemian at 8:25:00 PM