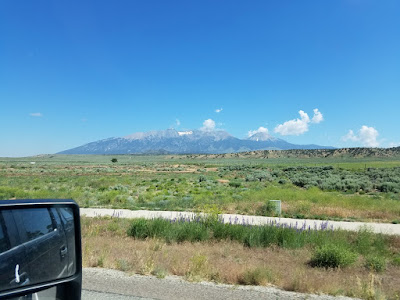 Time to hit our first official National Park of this trip.

I am pretty sure this was the first anyway. All the others were monuments or forests etc.

Yup it is a giant sand dune alright, the largest in the USA. 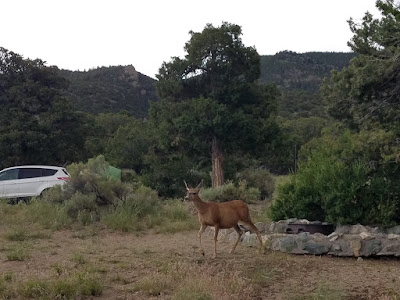 We arrived there relatively early in the day as the camping there is First Come First Serve.  (There were reservable spaces but this is the high season for the park so they were full).

Thankfully it was early enough as spots were still available. Although it turned out of the several we really only could squeak into one. And it took a little effort. 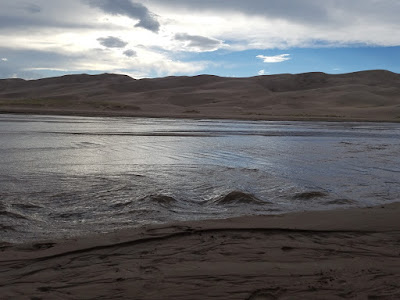 At this time of year water is still flowing through the park. It will dry up soon. But for the folks around here this is the closest thing to a beach so it is packed with kids playing in the sand.

Because of the dynamics of the sand the water does this weird surge kind of thing. You can kind of see some of the surges in the picture... they will disappear in a second and then it will surge someplace else. 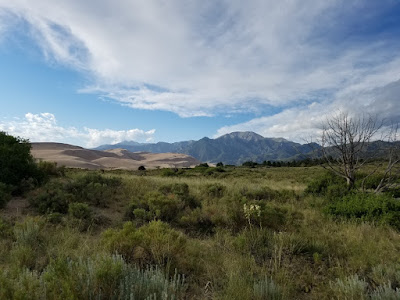 Besides the dunes there are some other trails up the mountains. We took Tucker on a pretty nice 4 mile loop as the sand isn't recommended for dogs because it gets too hot.

There was a log hiker to a pass but the description really made it sound like a waste of time. 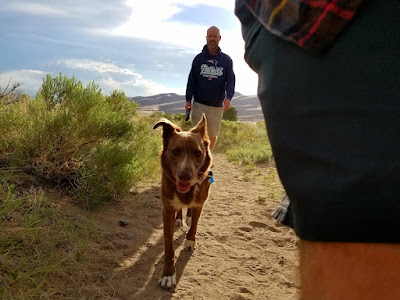 One morning we did get Tucker out early to the walk through the sand and the water.  But it did get really hot by about 11 am. 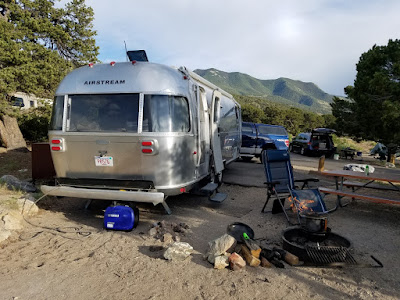 Shoe-horned into our site. It was cozy with a great view of the dunes. No services here so we had the generator out for the first time.

The deer came through every evening driving Tucker insane. Some of them even fell asleep next to trees in people camp sites. Wild!

Speaking of wild a gang of children hung out literally in the tree next to our site. They loved Tucker and he totally put up with being pet by half dozen kids. 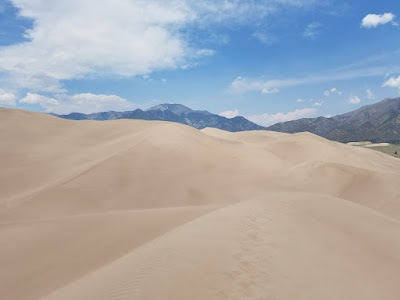 We were a bit lazy and only bothered to climb to the top of one of the dunes. You can go farther to the highest dune but to me you've seen one dune you've seen them all.

And it was hard taking 2 steps up sliding back 1.5 steps. The wind was crazy at the tops so it was like being sandblasted. 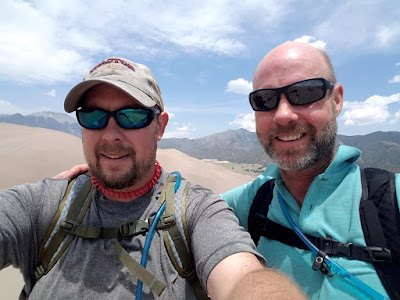 People also like to climb up and go sliding down on either plastic disks or snowboard like contraptions.

We watched a few and it looked slow and very little payoff for how difficult a climb it was. A view from the top of our dune, although you can't really get a good impression of how high we went. According to my phone and fitbit we went up about 600 feet.
Posted by Brian Ciemian at 10:02:00 PM