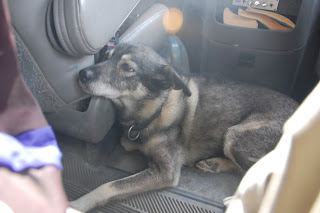 Wrangell is the largest national park and also the newest. It is almost completely un-developed wilderness. There are 2 dirt roads in the park each of which has a few hiking trails most of which are more for long distance multi-day treks.

And an old Copper Mine, which we are going to see, instead of driving the long terrible 62 mile dirt road we take a shuttle, this was our co-pilot March a really cute lovable dog. 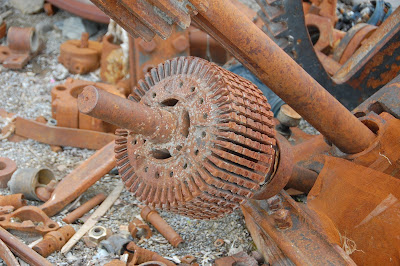 The drive takes a few hours each way as the speed limit is 35 and the road conditions don't often allow us to go that fast.

But there is a lot to see along the way and when you get to the Mine there is also a Glacier. However the glacier is so covered in gravel near the mine that you don't even realized it is there.

There is tons of abandoned machinery left over from the mine. 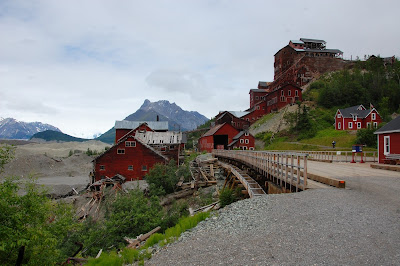 The mine was abandoned when it stopped producing enough copper to make any money. It was just left for years and years until it became part of the park.

It is the worlds tallest free standing structure, here you see it rise up the hillside. We at a tour that starts with a hike to the top and then goes down through the mine back to the street level. 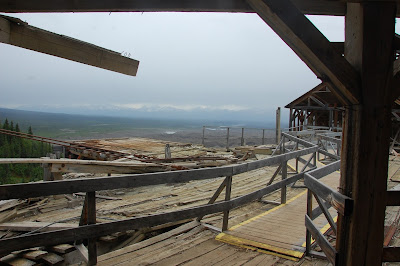 Top of the Mine Building, it looked a little scary but the pathways seems sturdy enough and besides we had hard hats on!

Most dangerous part was the low clearance on the stairways.

Working in the mine sucked, so they had terrible turnover, which you might imagine since they worked year round even in 40 below temperatures. 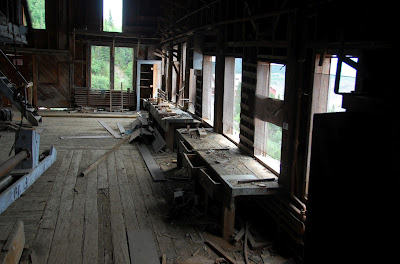 This was a machine shop in the mine these workers got heat and windows for some of the best working conditions at the mine.

The mine had a company town around it and also a second town the spring up next door where they could gamble, drink and what not.

Both towns are still there and have a kind of surreal vibe. Full of backpackers and hikers. 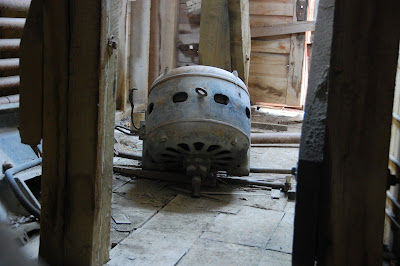 I think this was motor of some kind. The Mine was looted over the years most likely by the people left in the two towns.

Because we had a tight schedule for our bus we only got to see the mine town, the other town is only 5 or 6 buildings but they were probably interesting and it would have been cool to have a beer there like the miners used to.

This is the view where we got off the bus, you have to take a second shuttle bus to the towns after you cross a foot bridge over that river. A lot of private land and business are enclosed by the park so it isn't really like any other National Park I have been to.  The bus ride back out the rough road went by pretty fast, and they dropped us off back at our campground which made it easy. Still it was a long day.

Our campground is right down the road from the airport and the river, so Maxwell gets a lot of walks to the river so we can try to see tiny planes landing and taking off.  This is a backcountry outfit so they fly people into various places inside the Wrangell Park. Inside the park there are a bunch of cabins that you either trek to or get dropped off at by planes.

At the river are tons of fish wheels, which spin and scoop up Salmon. I watched a lot of them but never saw a fish get scooped up. Alaskan's are allow 500 fish a year. 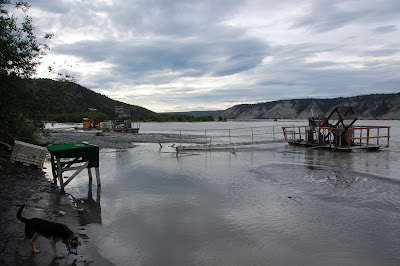 Later the campground guy stops by and turns our he is originally from Maine and visited this area 7 years ago and ended up buying a cabin before he went home.

He tells us all about the wheels and he gets more salmon than he needs or can really process. He lives a subsistence life where most of his food comes from fishing and hunting and the occasional long drive to Costco.

He is a nice guy and explains if we hangout near the wheels or the dip netters someone will probably just give us a Salmon or we might find someone who has a commercial license to sell us one.
Posted by Brian Ciemian at 12:53:00 AM