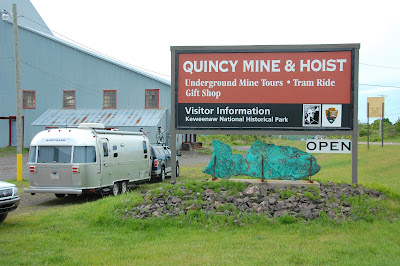 After sleeping in a bit at the Walmart we made some breakfast (Oatmeal with apples and coffee) and finally got back on the road.

We stayed in Houghton to tour Quincy Mine. It is an old Copper Mine in the town on the other side of the river from Houghton.

On that sign is a small part of the largest piece of copper ever found. More on that later. 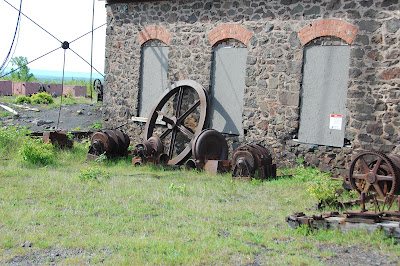 Much of the mine's former equipment is strewn around the property. Engines, pulleys and ore cars and water scoops etc. 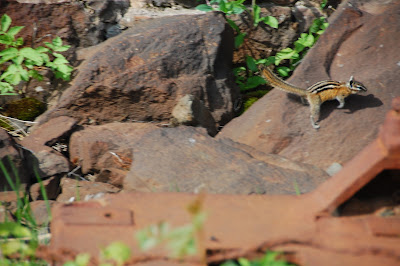 I caught this chipmunk scurrying around on the equipment and rocks.

He is moving fast! 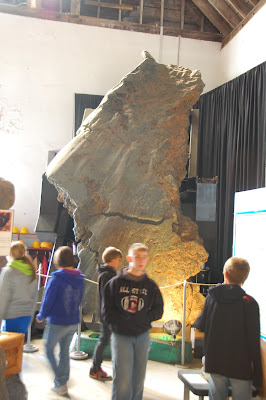 Again we got stuck with a group of school kids, it must be the end of the year season for school trips.

These kids ended up on the mine tour with us, with only a 15 (I'm guessing) year old girl watching them.

Anyway this is the other piece of largest piece of copper ever found. It weighs 18 tons, they lifted it up from the lake bed and it broke in two when it came up out of the water.

It was a spectacular find and they have a photo of a diver literally dancing on the copper under the water. 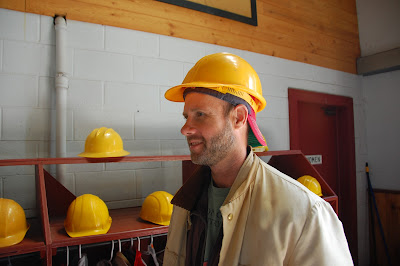 For part of the tour you go 7 levels deep into the mine (it goes down 92 levels for a total of 6000 ft deep). It is cold down there so you get a jacket and a hard hat for the tour! 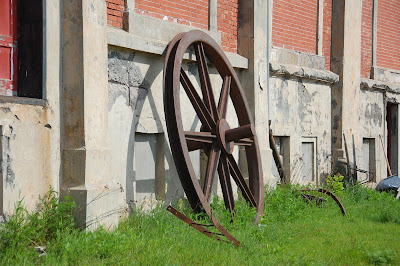 A large pulley used to lower equipment down the shaft into the mine. This mine had the largest ever steam hoist. It was built as a showcase to attract new investors to the mine. Sadly it worked but not well enough and the mine shut down when the price of copper dropped as a result of the great depression. 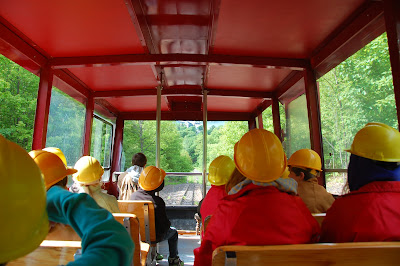 For the tour you don't go down the shaft but take a cog railway down the hillside to a tunnel that was originally made to remove water from the mine, but was enlarged to allow tours to go in.

The local University also goes in this way to do Mining Lessons. 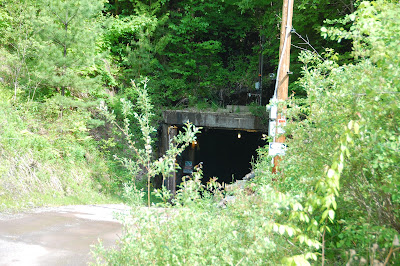 The tour starts by boarding a car towed by a John Deere tractor. 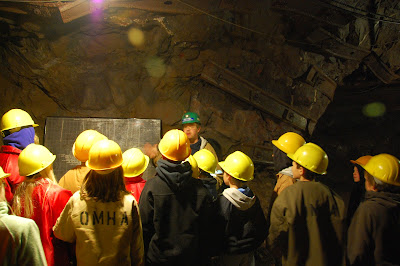 Our tour guide showing us how we are only a tiny way down in what is a huge complex of tunnels.

Since the mine closed in the 20's most of the tools used in the mine were primitive at best.

They mined by hand and candle light and later had some mechanical drills.

Works of dozens of nationalities worked in the mine. 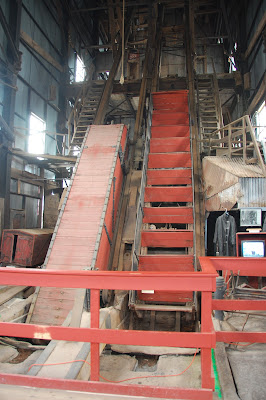 Here is the top of the shaft. On right is the person car that took 30 miners down into the tunnels for their 12 hour shifts.

On the left is an ore car that brought up the copper and ore. This is a rare mine where copper is found in it natural 99% pure state in addition to being found mixed into other minerals as ore.

Below is an embedded viewer of a Panorama I took of the actual Steam Hoist.

After the mine we got back on the road towards Minneapolis, MN along the way we stopped in a small town on the shore of Lake Superior and grabbed iced coffees and took a walk on the lake. It is amazing how many good bike trails and nice parks there are in this part of the country.

Later in the evening it was getting late so we pulled off into a county park to make dinner.  After that is was back on the road. We finally got in to Minneapolis kind of late I think about 9:30.  The campground we picked was a little spooky at night as it was part of an actual trailer park. But on the plus side it was 5 minutes from downtown. In the morning it wasn't so spooky and turned out to be totally fine.