Around Dawson Mining and Entertainment 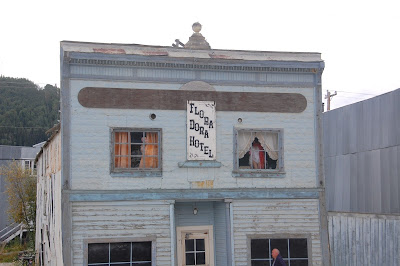 Dawson is an old west style party town! There are lots of cool old buildings and the town does have a party vibe. 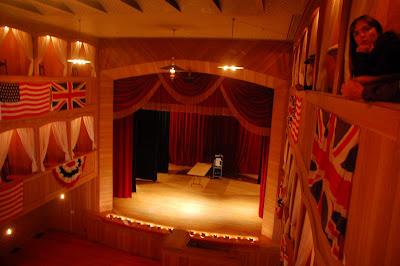 We took a tour of the Palace Grand Theater which is where the entire town went for entertainment.  From commoners who sat on the lowest level for 50 cents to big wigs who rented boxes by the month for 40$ and who bought even more expensive drinks. 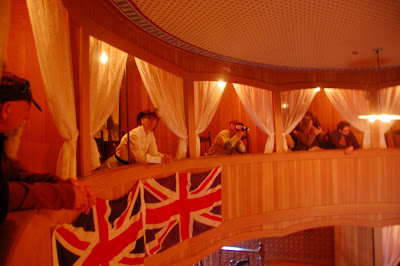 Our tour guide there in period garb is in the owners box, he sounds like a big personality and a character, he made a lot of money entertaining people, probably more than most of the people looking for gold. 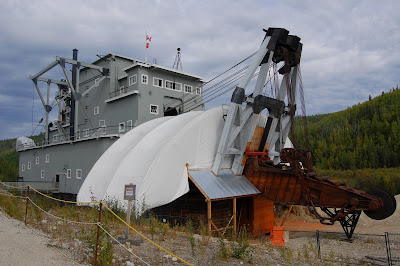 Speaking of gold we also visited this gold dredge. Here in the Yukon they do what is called Placer Mining, which means the gold is just loose in the gravel and instead of having to chip it out rocks all you need to do is separate it from the rocks,  gravel and silt. 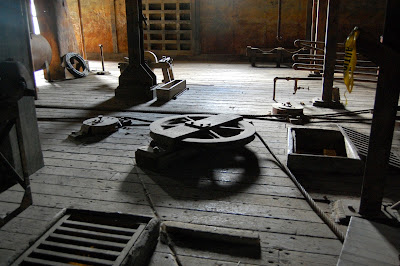 This enormous machine does just that and is run by a very small crew of 4 people plus some others outside of the vessel. And it is a vessel it basically creates and rides in a pond as it mines.

It is powered by electricity from a nearby hydro-electric plant built by the mining company. 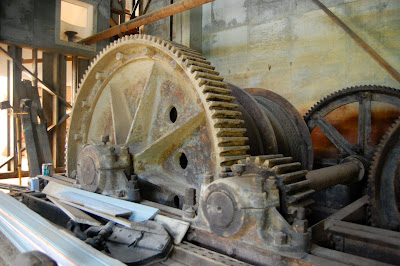 The operation is pretty basic, the front of the machine scoops up tons and tons of gravel and spins it with water to allow the gold (which is 19 time heavier than water) to sink into collectors. It is more complicated than that but basically it does that 24/7 for months at time. 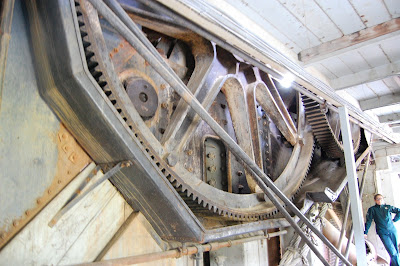 In a single season (about 200 days) the dredge moves just a 1/2 mile destroying everything in it's path. Behind the dredge is a rippled pile of rubble which has given up most of it gold.

The gold here in the Yukon is tiny, there are no nuggets to find only find particles of gold and the occasional flake. 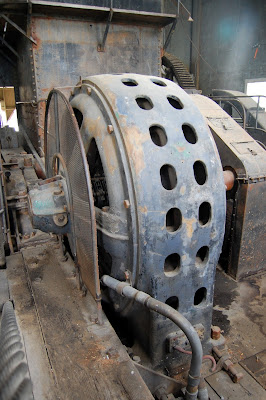 Processing tons and tons of rock only ends up yielding a few dozen teaspoons of gold! Kind of insane to think about but the workers are paid so little and process so much rock that that this kind of mining was very profitable.

The cost of building the dredge was recovered in the first season of it's operation.

When you think about how much this machine processes and how much gold it finds it seems crazy to bother to pan for gold by hand.

There are still tons of active mines in the area which are mining claims with sluices and machinery and with the price of gold so high I bet they are making money. 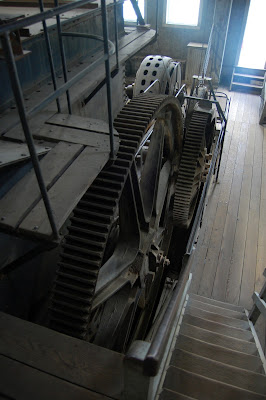 The scale of the Dredge is huge at over 8 stories high.

We drive by a bunch of the active mines and watch a little mining, there is also another public claim and we stop to check it out and watch some 20 somethings who are camping near by pan in the river.

We didn't see them find any gold but they were having a good time.

On the drive back out of the mining loop dirt road we stopped at Claim 33 a gift shop and mining claim where you can pay to mine.

The woman there is very chatty and we learn some interesting thing about the mining. 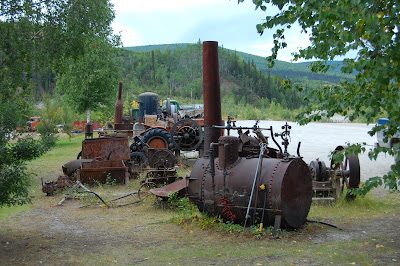 They have tons of old equipment (but who doesn't up here and in Alaska) which is pretty cool to checkout.

Sadly the owner of Claim 33 was swept off his ATV while he was crossing a river and was killed. He was fairly young and was pretty successful at mining several claims in the area.
Posted by Brian Ciemian at 3:18:00 PM