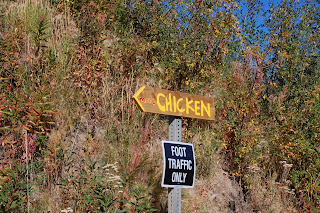 Ok I said those three businesses were all of chicken but this sign says there is more! Actually there are 2 campgrounds each with a cafe and gold panning. There are many gold claims around Chicken and people come here for the summer to strike it rich! 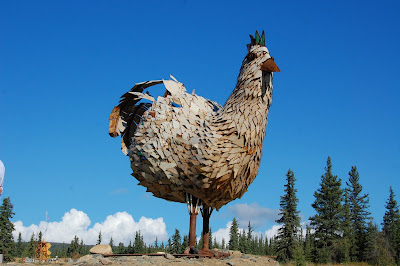 Not to mention all the Chicken art around town. This statue is very similar to the ones we say along the highway in the Dokotas 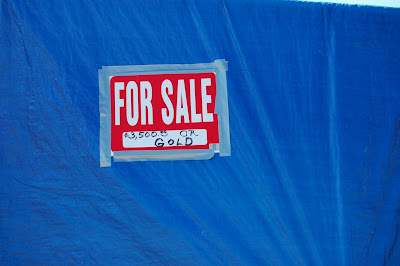 I spoke to our neighbor at the campground, he was from Wasilla where they have nicer winters but cool summers so he comes here to mine gold and enjoy the warm Chicken summer.

He shows me his tiny bottle of gold mostly dust with one tiny flake. I don't know if that was a day, week or summers worth of mining. 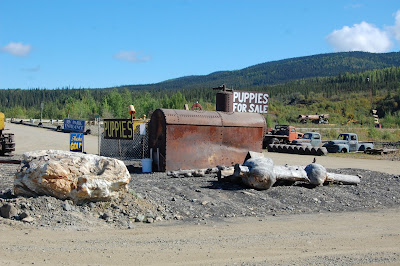 This Campground promised puppies but there weren't actually any!

Checkout those burl logs though, they have tons of those as columns in every cabin up here. 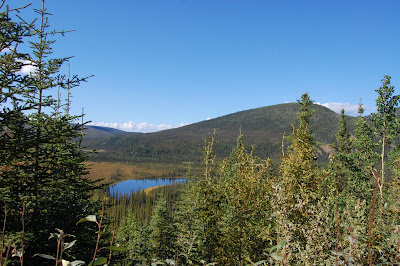 From Chicken we are heading to Dawson City or just Dawson as it seems to be called by the locals.

We have to take the dirt Taylor highway out of chicken and it is a twisty bumpy ride but has some great views. 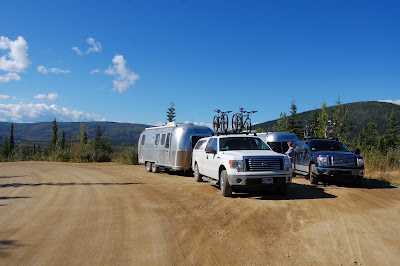 We stopped at this big turnout to enjoy the view, the driving on the dirt isn't too bad at all.

You only go about 35 max and it hasn't rained in weeks so the road is in good condition. 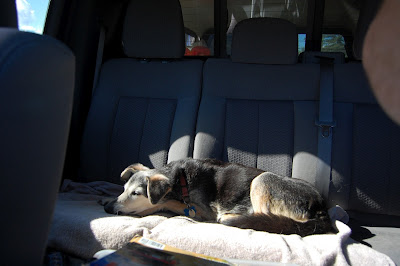 Maxwell doesn't even notice the bumps and sleeps the entire way as he would on pavement. 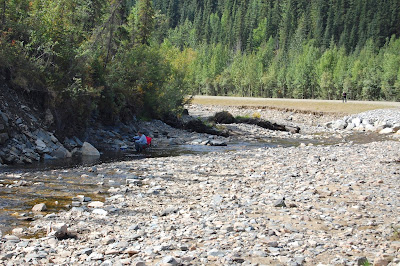 We are in a region called 40 Mile, where a big stretch of river is known for gold claims. We stopped here at a public claim were anyone can stop and pan for gold and keep what they find.

There were a few people working the stream and I played around in the water for a little while.

Eventually switch to the "Top of the World Highway" and it is correctly named. Basically is snakes over every mountain on the way to Dawson. On the road we cross the boarder back in Canada and the road is paved but soon reverts to gravel. At some point we notice my brother has a flat so we take a break and he tries to fill it and then fix it with green slime.  It doesn't work and so 4 miles down the road he changes his tire.

Turns out is it Discovery Days a big Yukon holiday and we are worries we won't get into a campground in Dawson.  We opt to stop before the ferry to Dawson and squeeze ourselves into a Yukon campground that has just a few empty sights. Dawson days is kind of like St Patrick's Day for the Yukon and the campground is full of drunk kids here to party.

We take the ferry on foot over to the city for some Ice Cream and a look around. It is known as a party town normally but this weekend it is in rare form.
Posted by Brian Ciemian at 1:48:00 PM