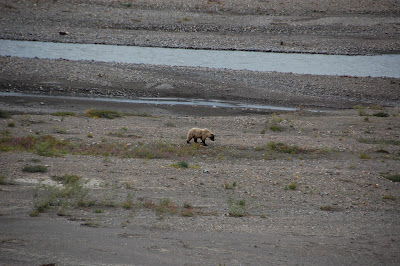 Today we are signed up for a ranger hike. It will be our first taste of hiking off trail, yesterdays hike was one of the few trails in the park.

Being a ranger hike we get a special bus that is picking us up between 9 and 9:30 which isn't even that early. That is one of the benefits camping 29 miles into the park.

Still is another bus ride probably about an hour and half each way. 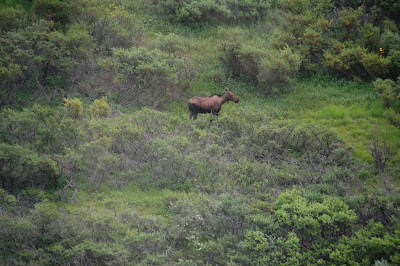 Anytime you are on the bus there is a good chance you will see some animals.

On this trip we saw the bear above and this moose.

The moose have been the most elusive animal except of course for wolves of which there are only 70 in the park and seeing them would be a rare treat. 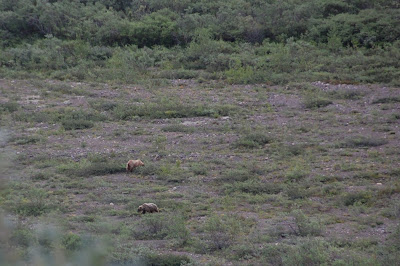 Two more bears hanging out along a river bank. 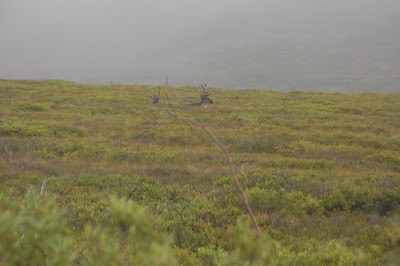 Anyway the hike begins when the bus lets us off on the park road near our hike. After that we hangout for bit and do some introductions around the group and some bear safety discussion.

The ranger (Monica) is very animated, friendly  and entertaining. 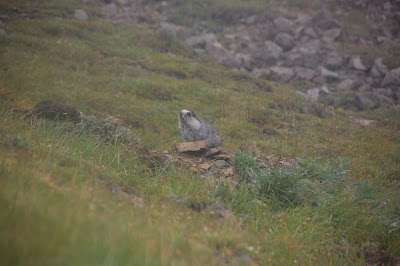 The off trail hiking is actually very strenuous, you can't tell but all that green stuff is very wet, mushy and also sometimes knee deep in willow bushes.

You can just trample your way through it all they don't care as long as you make your own way and don't fall into a single line.

Partway on the hike we spy this Marmot! And also a lot of ground squirrels 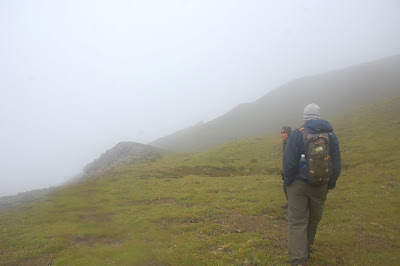 The main destination of the hike is Bird Lake, or rather former lake. It was never a lake until the slide we are approaching in this picture did it's slide thing!

That blocked the river below and formed a lake, until the flow of the water eventually broke through and the lake disappeared. 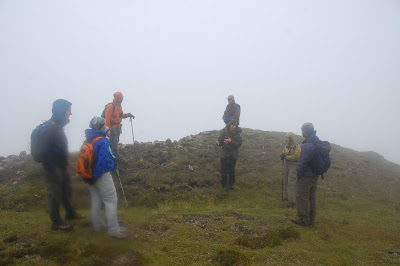 Monica points out that the Park is dynamic and that all that change happened in the last hundred or so years.

The hike was pretty cool and for the most part our fellow hikers are an interesting group as is Ranger Monica. 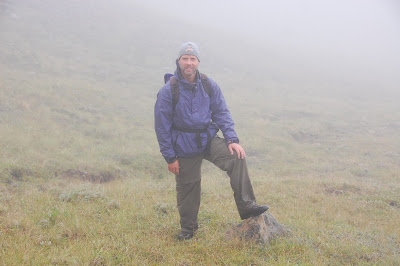 Will spent much of the day posing either sitting or standing on different shaped rocks. This one was a pyramid. 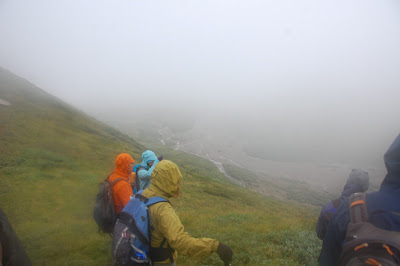 Finally we had to descend down the mountain we had climbed. We never really reached the top but I don't really think that was ever the goal. It was already so foggy at the altitude we reached that we couldn't see much of anything. 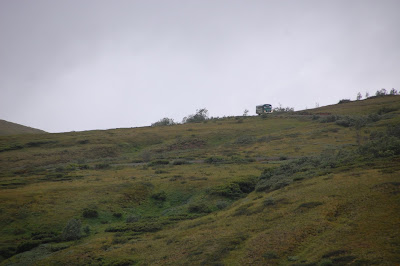 On our way down buses keep stopping on a portion of the road we can see, they are surely looking at bears.

This is something you have to remember when hiking in Denali, eventually you need to get back to the road and buses stopping near where you might be coming down is a bad sign. If this happens you just have to go a different direction.

These buses are way far away so no issue for us today. 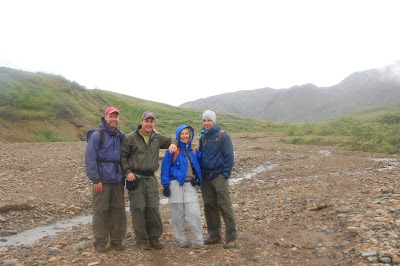 Here is a group shot in the river, we had to cross this river (which is tiny where we took the picture) each way on the hike and we got a little lesson in river crossings.

You had to get a little wet but it didn't really matter since the willows and tundra was all wet anyway.

After finishing a hike in Denali you just wait or walk down the road and wait for a bus to come along. If there is room you get on, sometime you might have to split your group up if there isn't room.  We get lucky and don't wait long at all when a pretty empty bus comes along and takes us back to our campground.
Posted by Brian Ciemian at 10:15:00 PM