Painting On Stone and the USA 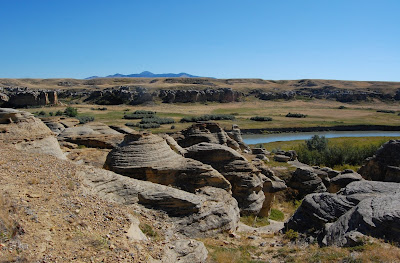 This is our last day in Canada! We are taking a little detour to see Painted-on-stone Provincial Park.

We got in a little too late to catch the 2 PM tour which is a bummer because you can't see much of the carvings without going on a tour. 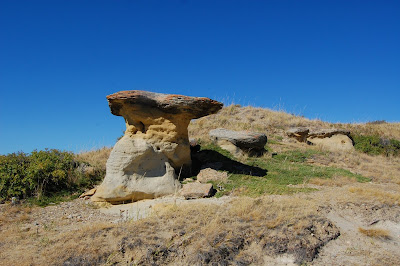 There is a nice campground here and we could camp and go tomorrow but it is also at 2 PM and it is several hours so we would lose a day of travel.

Instead we take a few mile hike with Maxwell to see what carvings we can see. 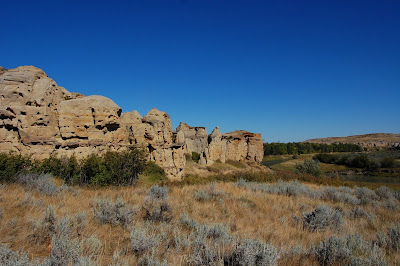 The landscape is pretty cool with a river and a canyon of hoodoos surrounded by large expanses of plains. 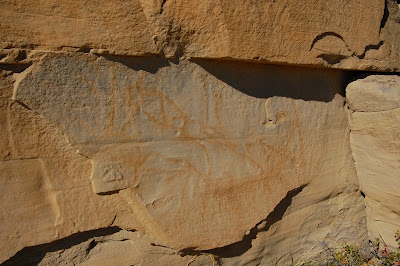 This is a painting of a horse (top part) and bison (botton left). It is hard to see in the picture and not that much easier to see in person. It is surprising it is still around at all considering all the wind and erosion. They estimate it is between 1000-3500 years old. 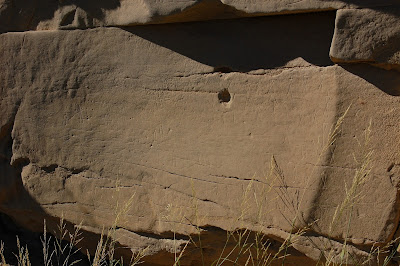 This is a the battlefield carving it is one of the biggest they have found, you probably can't see it too well in the picture but it depicts a huge battle with horses and people. 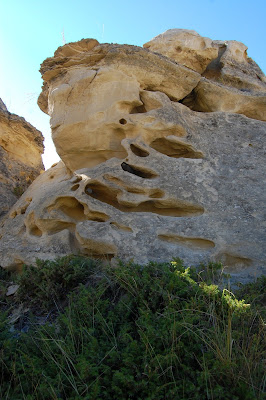 The wind and sand just carves up the hoodoos with curves and holes and tunnels through the rocks.

You aren't supposed to reach in the holes because sometimes rattle snakes like to hangout in there.

Did I mention it is actually sunny and hot! Probably the hottest weather we've had this entire trip!

The mountains you can see in the distance of the panorama is in Montana! Yahoo the USA!

I am feeling patriotic today. 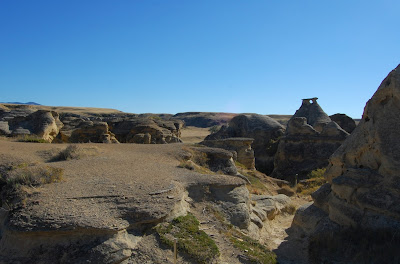 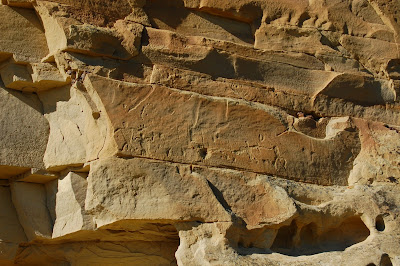 On of the easier to see carvings.

After the hike we cool off the car and get a drink for us and Max and head for Montana.

When we get to the town before the border all the trucks are parking on the side of the road and in the gas station. Something is up. 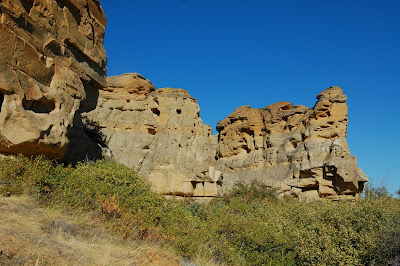 Turns out the border has been closed for a few hours for an unknown reason.  It is late so we pull into the welcome center with dozens of truckers and make some chili for dinner.

While we are eating we hear a truck walk by announcing the border is open! We don't rush figuring there will be a backup at the border anyway.

Finally we get to the border there wouldn't have been a backup because all the trucks have to be checked before hitting the crossing.  We only see a Candian Border Agent and he grills us about foods but it goes quick. My brother had to surrender some citrus fruit and also the green tops of his tomato.  We ask why the border was closed and they aren't talking.  I looked it up later and there was a rumor of a suspicious package they had to investigate.

We are in a Walmart tonight since we got in so late it didn't make sense to get a campsite.